Just east of Atlanta and just south of the Blue Ridge Mountains, Athens, Georgia offers ELUNA 2013 attendees a beautiful conference facility, a choice of hotels in walking distance, and a bustling downtown filled with music, shops, and restaurants; all at the entrance to the University of Georgia’s verdant campus. 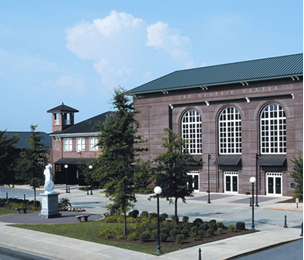 The Classic Center brings together state-of-the-art technology and Southern hospitality in a venue that features new and modern spaces perfectly paired with restored historical structures.  Positioned at the east end of downtown Athens, the Center is within walking distance of all conference hotels.  Daily parking in the adjoining parking deck is free for conference attendees.

The conference planners have arranged for blocks of rooms at all downtown Athens hotels, along with one hotel on the western side of town, providing a choice of experiences for all tastes and budgets.  All of the downtown hotels are within walking distance to the Classic Center (from 25 yards to 7 blocks).  All hotels provide free Wi-Fi.  Most provide free parking.  Conference room rates range from $89 per night to $194 per night.  All of the hotels must be called directly in order to make a reservation using the conference group rate code; see details below. 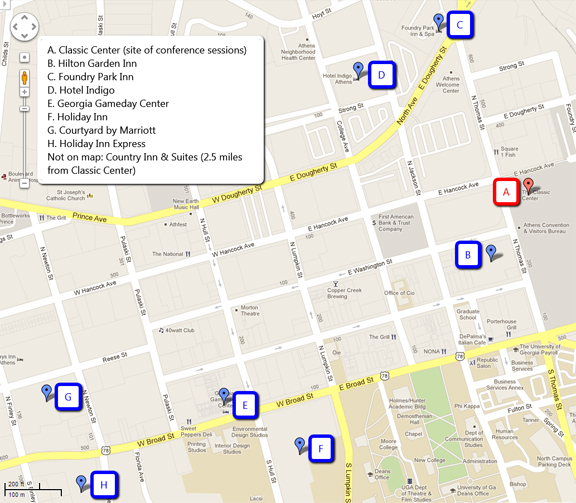 Click the map above to view at a larger size. An interactive Google Map of the 2013 ELUNA Hotels and the sites of the conference sessions and events is available here: http://goo.gl/maps/ayvvs

Athens is an 80 mile drive from Atlanta Hartsfield Airport (ATL) and a 110 mile drive from Greenville-Spartanburg Airport (GSP). The Atlanta airport serves as a major hub for travel throughout the Southeastern United States and is a focus city for Southwest Airlines and the primary hub of Delta Air Lines and Delta Connection partner ExpressJet.

Once in Athens, most attendees will not need transportation, as all of the activities provided by the conference will be within walking distance of all but one hotel and the Classic Center.  In addition, University of Georgia campus bus service connects downtown Athens will all parts of the large UGA campus, which affords additional options for the visit, including the UGA Libraries, Special Collections building, and the Georgia Museum of Art.  Athens also offers public bus transportation and cab service.

Things to Do While in Athens

The New York Times called Athens “Live Music Central” and Rolling Stone Magazine named Athens the “#1 College Music Scene in America”.  By night, Athens is alive with a variety of music clubs and bars that offer entertainment suited to every taste and no visit would be complete without sampling a bit of Athens’ world-renowned music scene. From a few bands that started something different (The B-52’s, Pylon, R.E.M., and Widespread Panic) and gave Athens national attention, there are now hundreds of active bands, over 10 recording studios, and several independent record labels. World-famous venues, such as the 40 Watt Club and the Georgia Theatre, continue to attract up-and-coming musical acts as well as old favorites. With jazz, classical, blues, country, and rock performances occurring on a regular basis, Athens provides one of the most diverse and affordable music scenes in the world.

Athens has a lively art scene, in which artist-run galleries and events cross-pollinate with the Lamar Dodd School of Art, the Georgia Museum of Art, the Lyndon House Arts Center, Athens Institute for Contemporary Art (ATHICA), the Gallery@Hotel Indigo, and more.  The Ciné art house cinema features new and classic releases, a variety of alcoholic, caffeinated, and all purpose beverages, a gallery, and a lab space where all of kinds of performances and events take place.  They offer a $25 dinner and a movie combo in tandem with The National on Sunday, Monday, Tuesday nights that is a great way to experience one of the best restaurants in town along with the best movie theatre.

Athens has a rich history, beginning with the chartering of the University of Georgia in 1785 as the first state college in America.  In 1806, the city was incorporated under the name Athens, after the ancient Greek center of higher learning.  Take a stroll through the historic arches at the downtown intersection of Broad Street and College Avenue to witness the beautiful historic North campus of the University of Georgia, and continue on a self-guided tour.  Athens has 16 neighborhoods on the National Register, including four house museums, open for public tour.  See page 17 of the Visitor’s Guide for a $5.00 off coupon for either the historic neighborhood or house museum tour package, along with maps and descriptions of historic attractions. Stop in the Athens Welcome Center at the Church-Waddel-Brumby house on the corner of Dougherty and Thomas Streets, between the Classic Center and The Foundry Park Inn and Spa, for more information or to take a tour, or see their Podtour and map of historic downtown Athens.