In late 2016, the ELUNA Steering Committee announced the creation of the Sherrie Kristin Memorial Scholarship, which honors Sherrie Kristin’s many contributions to the ELUNA community. The first scholarship winner, Laura Krossner, wrote a report on her ELUNA conference participation that was supported by this award:

I was the lucky recipient of the first Sherrie Kristin Memorial Scholarship, granted by the ELUNA Steering Committee. With the ELUNA annual meeting cost and hotel covered by the scholarship, Drake University was able to come up with funds to cover my attendance at the Ex Libris Technical Seminar, where I learned a lot from the sessions presented by Ex Libris staff. The ELUNA Annual Meeting proper kicked off with a social at the Punch Bowl Social in Schaumburg, after which I felt refreshed and ready to begin the Annual Meeting the next day.

The Annual Meeting layout is a nice mix of Ex Libris-led and user presentations. From some Ex Libris-led sessions, I learned about the new Alma UX and its planned rollout period. I’m especially excited for the new Advanced Search look and feel. I went to a user-led session about license management in Alma, which is something Drake University library has never looked at, but is now on my list of functionality to implement.

Drake University recently started a subscription to BrowZine. Therefore, it was especially timely to attend the BrowZine API session and learn about brand new API functionality developed by BrowZine, including the Discover Similar Journals API (which will surely boost our usage statistics!) and the Article in Context API, which will show users other articles in the same issue of the journal as the article they are currently viewing.

One of the more interesting and interactive sessions I went to was on managing COUNTER reports in Alma. Both Ex Libris staff and Alma users were there for a lively discussion of problems they are facing with the newly rolled out system. Ex Libris was able to hear from users about the problems and missing functionality, coupled with suggestions on how to fix them.

My scholarship also offered me a ticket to the Networking Dinner, where I learned just how quickly Ex Libris customers can plow through sushi! It was fun to get to mingle with other users and discuss workflows and their thoughts on Alma/Primo. Overall, I had a great time at the Annual Meeting, and I learned a lot of useful information that I’ve been able to share with others in my library. I’d like to take this opportunity to once again thank the ELUNA Steering Committee for selecting me as the scholarship recipient, and for putting on a great conference. 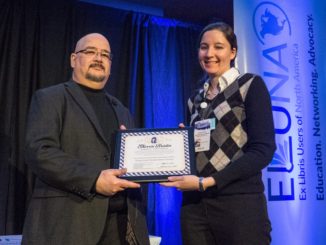 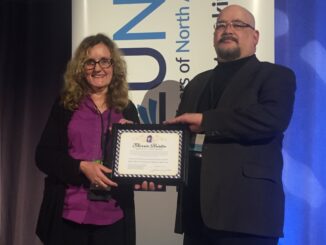